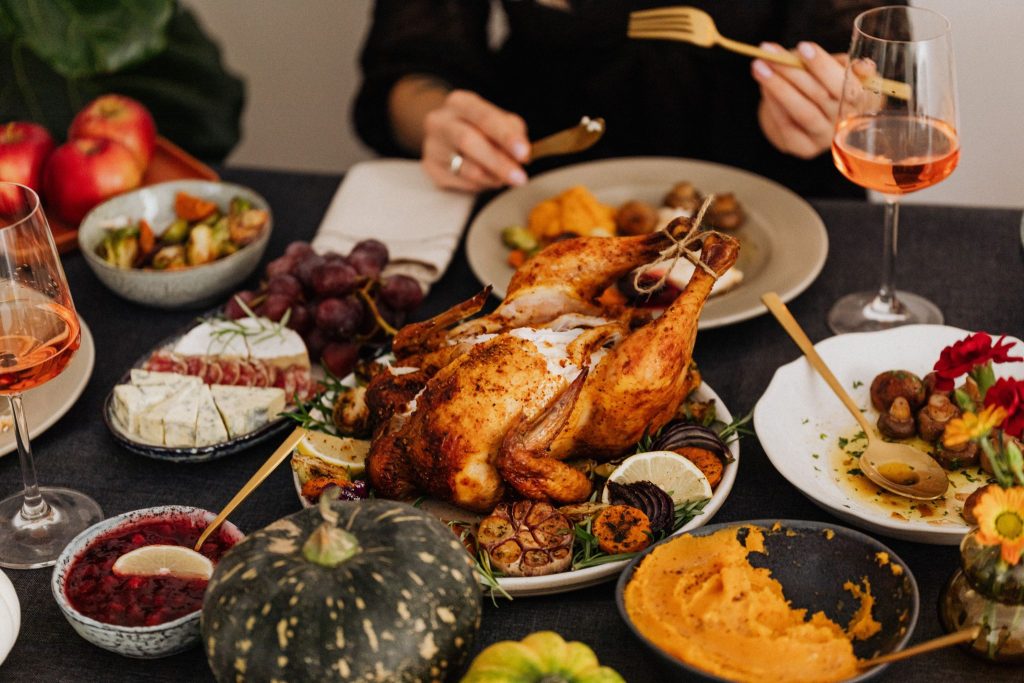 Although many American retailers start filling the shelves with Christmas paraphernalia long before Halloween closes out, Thanksgiving is the event that typically kicks off the holiday season in the United States. Thanksgiving sets the tone for the weeks to come with a celebration of food, family, and giving thanks for what we are grateful for.

Thanksgiving is uniquely American in how it is celebrated. It has evolved into a blend of old and new traditions that are widely secular. Participants don’t have to be of a particular religion, group, or background to fully partake in the festivities. The only requirement is to share a meal with your loved ones. Then, it’s up to you to incorporate your cultural traditions and family recipes to make the holiday entirely your own.

Where and when the first Thanksgiving took place is one of the controversies surrounding this annual festival of food. Some historians believe that the first gathering to give thanks occurred in 1565 when Spanish explorer Pedro Menéndez de Avilé arrived in St. Augustine, Florida. Documentation shows that the explorer invited local inhabitants of the Timucua tribe to share a feast celebrating the crew’s safe arrival to shore. According to some historical reports, in 1619, British settlers arrived in Virginia and declared that day as a “day of thanksgiving to Almighty God”, predating the more popularly-known Thanksgiving origin story.

Despite the two earlier instances of thanksgiving celebrations, the more widely held belief is that the first Thanksgiving took place in Plymouth, Massachusetts, in 1621. As the story goes, the peaceful feast of fowl, venison, fish, lobster, clams, berries, fruit, pumpkin, squash, and turkey was shared by 90 members of the local Wampanoag tribe and 50 early English colonizers to celebrate the settler’s first successful harvest. Legend has it that the native tribe was invited to share the meal for their integral part in teaching the newcomers how to harvest the land, which was crucial to their survival in this new country.

Some modern-day Native Americans don’t support how the history of Thanksgiving is portrayed, as it represents an inaccurate depiction of the relationship between the early colonists and the Wampanoag people, who suffered greatly in the years to follow.

Despite Thanksgiving’s controversial beginnings, the cultural myth shares some similarities to the modern-day immigrant experience. The early settlers came to America in search of a better life for themselves and their families. The story of Thanksgiving is about bringing different cultures together in a shared experience of food and friendship, giving thanks for a new life, new opportunities, and new growth. And as such, in 1941, President Franklin D. Roosevelt declared every fourth Thursday in November as the Federal Thanksgiving holiday.

The idea of Thanksgiving isn’t uniquely American. Other countries around the world hold festivals around the same time to celebrate a successful harvest season:

The American Thanksgiving holiday has lost much of its original religious customs throughout the years and instead focuses the celebration on sharing a meal with friends and family. While no Thanksgiving is celebrated in exactly the same way, there are some common traditions that you may find in many American households.

Turkey may be the most common item on the tables of American families on Thanksgiving day. The National Turkey Federation estimates that approximately 46 million turkeys are eaten at Thanksgiving, and about 95 percent of those surveyed eat turkey at Thanksgiving.

The origins of serving turkey at Thanksgiving are unknown, as no historical record indicates that turkey was the main dish at the Plymouth Thanksgiving. However, it has become a big part of an American Thanksgiving celebration. Whether you fry it, bake it, or roast it with herbs and spices from your home country, there are no rules to how one should enjoy a Thanksgiving turkey.

In a survey by YouGovAmerica, 75% of those surveyed will have stuffing at their Thanksgiving dinner. According to Wikipedia, stuffing is an “edible mixture, often composed of herbs and a starch such as bread, used to fill a cavity in preparation of another food item. As a cooking technique, stuffing helps to retain moisture, while the mixture itself serves to augment and absorb flavors during its preparation.”

Stuffing predates the first Thanksgiving by about several thousand years. Apicius de re Coquinaria, one of the oldest cookbooks in existence, included recipes for stuffed chicken, rabbit, pork, and more. This traditional Thanksgiving staple is prepared in many different ways, and may even be called “dressing” depending on where you are in the U.S.

64% of Americans surveyed will have a cranberry sauce side dish at Thanksgiving. Sweet and tart, cranberry sauce brings out the savory, juicy flavor of the turkey. The New Jersey Star-Ledger, a newspaper at the time of the Civil War, reported that “Cranberries officially became part of the national Thanksgiving tradition in 1864 when General Ulysses S. Grant ordered cranberries be served to soldiers as part of their holiday meal.”

Sharing what you’re thankful for

Many families will share what they are thankful for this year at the Thanksgiving dinner table, keeping with the tradition of “giving thanks” at Thanksgiving.

Parades have also become a big part of the Thanksgiving day celebrations in cities and towns across the United States. The most famous Thanksgiving parade is hosted by Macy’s department in New York City. The parade has taken place annually since 1924, attracting some 2 to 3 million spectators along its 2.5-mile route and drawing an enormous television audience.

The National Football League’s (NFL) tradition of Thanksgiving Day football began in 1934 in a game between the Detroit Lions and the Chicago Bears. Tickets for the game sold out two weeks beforehand and cemented the tradition of NFL football games on Thanksgiving every year after.

The Friday after Thanksgiving, known as Black Friday, is the first official day of the Christmas shopping season. The story of how this day got its name is a bit of a mystery but is very much a part of the Thanksgiving holiday. On this day, retail stores will offer extended hours, discounts, and special sales, causing some shoppers to wait in line before the store opens to take advantage of the savings.

One of the more unique Thanksgiving traditions is the presidential pardon of a live turkey. At a White House ceremony, the President of the United States will “pardon” a turkey, granting it a reprieve from being served as the Thanksgiving main course. The pardoned turkey will then be sent to live on a nearby farm or petting zoo.

Making Thanksgiving your own

Old and new Americans may celebrate Thanksgiving at different times and in many different ways, but the essence of Thanksgiving is a meal with family and friends, and how you make that happen is entirely up to you. Many families incorporate favorite family recipes passed down for generations. So whether your Thanksgiving spread involves your grandmother’s much-cherished recipe for lumpia or dumplings and your turkey is glazed in soy or seasoned with a curry rub, the choice is yours.

Throughout the world, people honor and remember their ancestors through the food they make and the traditions they keep. Thanksgiving is the perfect American holiday to blend old and new customs. Offer to bring a dish from our homeland if you’re not hosting your own Thanksgiving dinner, but rather are invited to join new American friends. Sharing a dish that’s meaningful to you can be one of the best ways to contribute to a holiday that is founded on giving thanks for the safe journey to a new land and a fresh start at a new life.